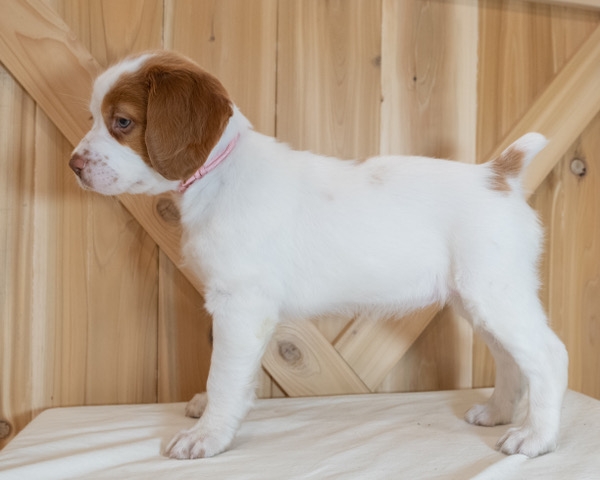 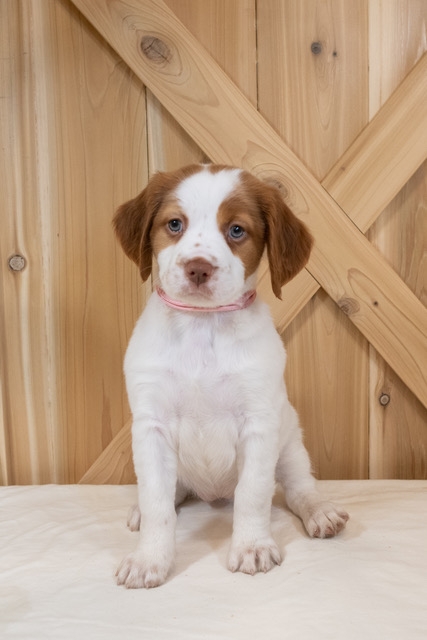 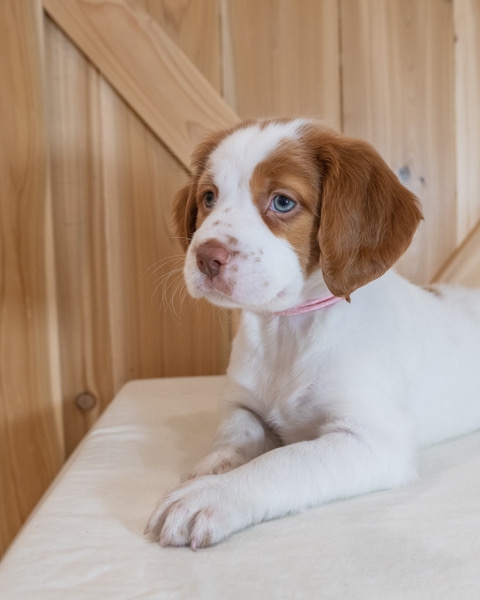 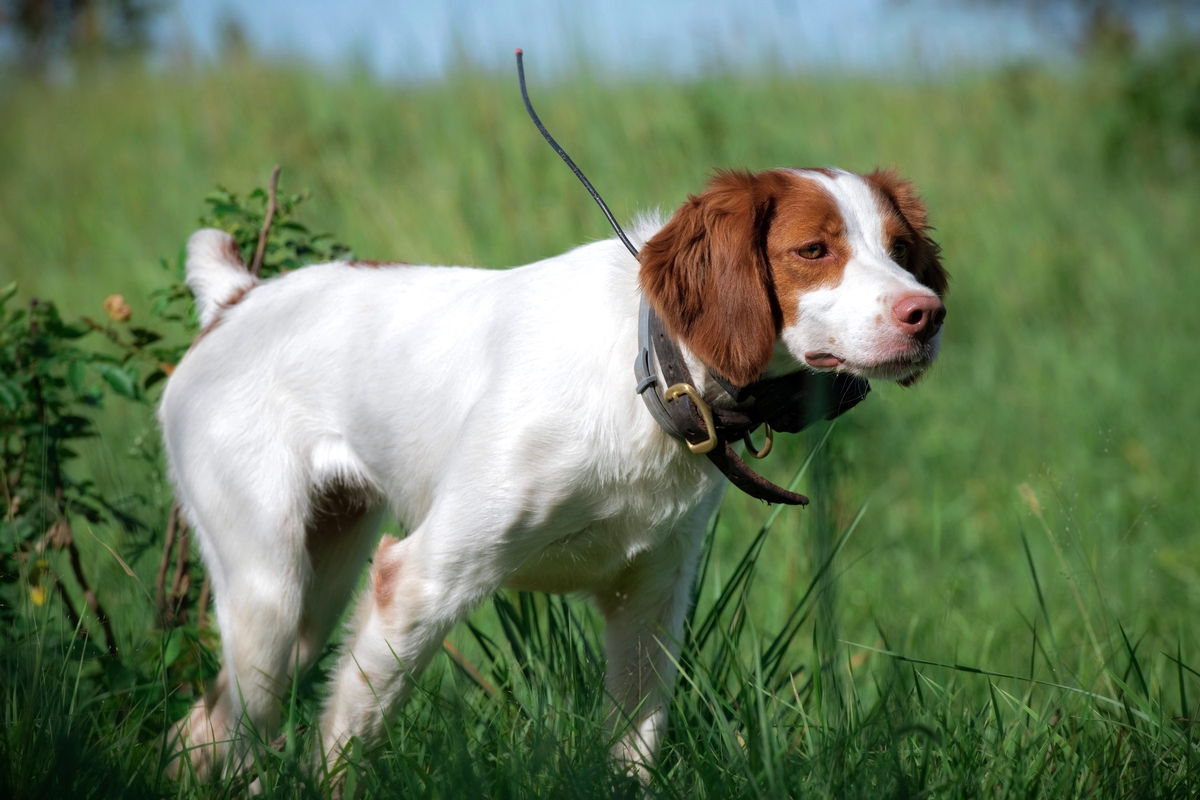 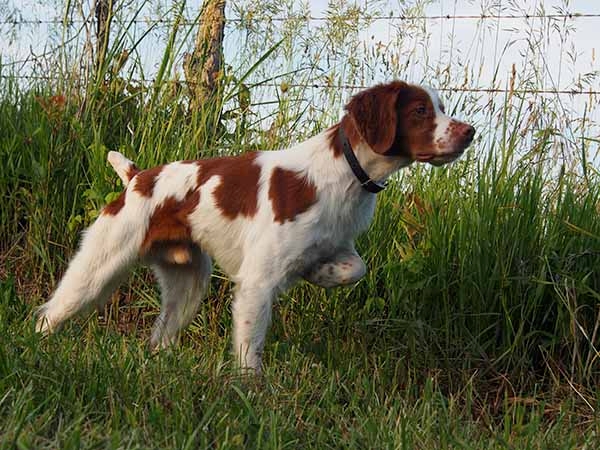 We are excited to be able to announce Osage Rose by 2xNGDC GFC AFC DC Hope's Chief Of Crosscreek (Chief) & Osage Prairie White Oak (Blanca)! This is a very clean bodied female puppy that we expect to make a great field trial prospect or wild bird gun dog.

We breed for quality. We are invested in our dogs and dedicated to knowing what they produce. In light of that dedication, we are keeping both a male and female out of Osage Rose's litter to develop, hunt, and potentially breed once they have proven their qualification in the field. The stud owner, Barbara Pepin, is doing the same.

This line of Brittanys goes back to the very first legendary dogs that Delmar Smith achieved field trial history with, which ended up putting both him and multiple dogs in the Hall of Fame (HOF). Just some of the remarkable dogs that found their way into Delmar's kennel and ended up contributing valuable genetics to our bloodlines include FC Holiday Britt (HOF), Towsey (HOF), Pacolet Cheyenne Sam (HOF), and Holliday Britt's Bazooka (HOF), and Way-Kan Jill (HOF). After Delmar's retirement from his field trial career, Rick Smith took up the torch handling and winning with distinctive dogs such as NFC/FC/AFC Hi Proof Rum Runner, Pacolet Cheyenne Sam (HOF), and Perry's Rustic Prince (HOF).

Generation after generation of this pup's lineage have been tied to our family. The more recent generations have not been campaigned in field trials, but have instead been heavily relied upon on our professionally guided hunts on wild quail in Texas. South Texas in particular has been our dog's proving ground. It is our belief that a Brittany that can reliably produce quality hunts in the pastures we have hunted in South Texas, can do the same anywhere in the country.

Osage Prairie White Oak ("Blanca") is a daughter of one of the best Brittanys we have produced, Tall Chief of the Osage (ironically his call name is “Chief” which is the same as the pups’ sire). Rick is responsible for breeding Chief's sire, B.B.s Got Rhythm, who was one of our top guide Brittanys for many years before his son, Chief, took the helm. Blanca is a powerhouse of a Brittany. She goes to the country with style, endurance, and heart. She is not one to lay on the couch for long. She is quiet in the kennel, but always ready to go to the field. Her pedigree goes back to additional field trial greats such as FC AFC Highpoint Blazin' Lamont, NFC FC Beans Blaze (HOF), FC AFC Tejas Iron Mike, Nolan's Last Bullet, NFC DCH AFC Ban-dee (HOF), FC AFC Scipio Spinks (HOF) and on.

We were first introduced to 2xNGDC GFC AFC DC Hope's Chief Of Crosscreek ("Chief") through his offspring. We noticed his pups were consistently high quality, intense bird dogs. After talking with Barbara, we became convinced that her dog had a lot to offer in an outcross from our line. Barbara shared with us that Chief is not just a successful field trial champion, but, possibly even more important to us, a level minded individual that looks for birds when others quit. He has a smooth gait and lasting endurance to that carry him through tough hunts. He has the rare quality of being relaxed in the kennel and consistently focused in the field. Chief has run at Nationals 6 times and has placed 5 of those times. His most recent placement (just this past year) was 3rd at the National Gun Dog Championship at the age of 9. In 2015 he earned the Magnum's Masked Man Award and was recipient of the Garmin Shooting Dog Award in 2016 and 2017. He was also awarded the Dual Dog of the Year in 2018 and again in 2020. He is the only dog to have garnered the Garmin Award, the Magnum's Masked Man award, and the National Championship all in the same year. We think Chief has soundly demonstrated that he has a lot to offer the breed.

These pups have been enjoyable to whelp and set on the right developmental path. As with all of our dogs, we performed the Supper Puppy Program with these pups from days 3-16. This program has been shown to help stimulate development and set dogs up to be able to handle small stressors or changes in environment/sensation.

As the pups have grown, we have continued their development with sensory enrichment experiences (tunnels, new sounds, different toys, etc). They have been introduced to house breaking with the use of a litter tray. By 7 weeks of age they were very successful in either going to the bathroom in the tray or outside. Their whelping room stays pleasant.

Rose is a very clean bodied, feisty pup. She has an alpha personality. Rose was one of the smaller, but most athletic built, pups in her litter. She has a great "can do" attitude.

Rose has had a great start in life and has the potential to be an exemplary bird dog. She will be available to serious hunting or field trial homes. Preference will be given to homes that will give her the most opportunity, development, training, and experiences.

Rose will be picked up at RSK upon purchase. All travel arrangements and expenses will be the responsibility of the new owner. She will go home with a travel bag with a Puppy Development DVD, bowl, water jug, and a small bag of the feed that that we recommend, Purina Pro Plan. When she goes to his new home Osage Rose will have pre-paid registration through American Kennel Club, be current on shots, be current on wormer, and have dewclaws removed and tail docked.

These pups will be the right age to come back for our Spring 2022 Training Class and will be guaranteed a spot in the class when the training reservation is filled out at the puppy's send home.

If you are interested in purchasing this puppy, please email us.