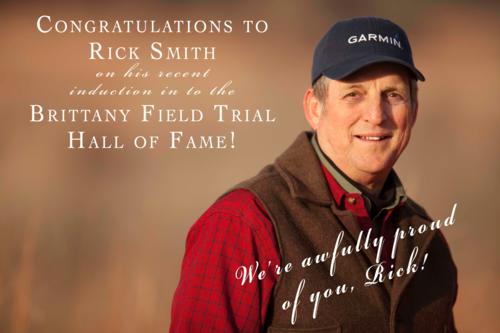 We are very proud of Rick's induction in to the Brittany Field Trial Hall of Fame this past weekend.  Rick has been devoted to bird dogs, and to Brittanys in particular, all of his life.  He genuinely cares about the dogs and has worked dilegently for the breed.  Not only is he known for his work breeding, training, and trialing Brittanys, but he has judged many championship field trials and donated both time and money to help preserve the history of our sport through the Bird Dog Foundation.

The following are excerpts from Diana Kubitz's letter nominating Rick Smith for the Brittany Field Trial Hall of Fame:

Rick is a giver, he gives of his time, his money, and most importantly his knowledge of birddogs to anyone and everyone who needs it. I’m proud to call him my friend and was grateful that he accepted the chairmanship of the Brittany Hall of Fame. Under his leadership the vision that the Cartmell’s and the Webb’s had for its future has flourished. Jim and Janet Chase were a driving force behind our new Brittany wing and Rick made a great cheerleader! He constantly challenges all of us to set high standards and lofty goals for the BFTHF. Thanks Rick!

Some Facts About Rick:

Rick drove a horse drawn dog wagon for his father (Delmar Smith) (handler/trainer of 5 Brittany Field Trial Hall of Fame members Towsey, Way Kan Jill, Holiday Britt’s Bazooka, Holiday Britt, and Bazooka Brandy) who was training dogs in Canada in the summer of 1957, the wood wheel dog wagon belonged to Rick’s grandfather B.F. (Dutch) Epperson who also was a dog trainer. He trained and handled such dogs as Field Trial Hall of Fame member Spunky Creek Boy and National Amateur Champion Spunky Creek Coin in the 1930s. Since Rick’s father was a professional trainer and Rick was working for him making $1.00 a week, he was considered a professional trainer at 10 years of age.

The first litter of Brittanys Rick raised was in 1971, the most notable dog he whelped was National Champion Hi-Proof Rum Runner. He is a member of Brittany Field Trial Hall of Fame. Rick still (1971 to 2013) raises and sells Brittanys to the public after 42 years. Rick was the breeder of the "Sire" of 2012 ABC Hall of Fame member Nolan's Last Bullet.

These four dogs by themselves won 78 Open All Age, Limited All Age or Championship Firsts.

Brandy’s Bullet (National Amateur Champion and winner of ABC National Pheasant Classic) owned by Bill Norvell was tied with the most one hour wins/placements when he was retired from competition.

You can see more about Rick and his induction in to the Hall of Fame on the following websites: